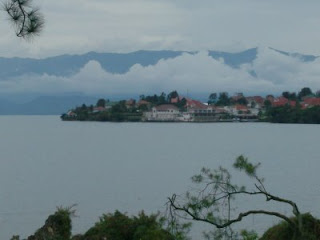 Last night, between 8 and 9 PM, 6 people dressed in civilian clothing entered the house of a man (I have been asked not to use names). This man worked as a guard with the organzation that my husband also works for. He was the man that would greet me whenever I visited my husband's office.

Often he would greet me with news about the house he was building on the far side of town. Materials are expensive and he was progressing slowly, building much of the house with his own hands. But a couple months ago, the major work on the house was completed and he was able to move in with his wife and 11 children.

Last night, 6 people entered his house and asked him to come outside (or forced him). They apparently attempted to rob him, we are unsure of what was taken at this point. But he was not a very wealthy man, and he had put most of his money into building the house.

He was then shot in the back and killed. Apparently, as the attackers fled they ran into a group of police, more shooting ensued and one of the police was injured. We do not know more at this point. To tell you the truth, we may never know more. In Goma, people are afraid of incidents like this. It seems entirely possible in the minds of most people here, that unknown assailants might come into you house at night and rob and kill you. They don't need a reason to target you and you don't have to have much money. In my American mindset I want reasons. I want detailed explanations about what happenened and why. People here seem to have realized that those explanations often never come.

My husband works with a staff of 21 people in Goma. This is the second member of his staff to be killed by armed robbers within the last two months. We are at a loss to explain this. Both men who were killed lived near the outskirts of town, in particularly insecure neighborhoods. Beyond that, we have no idea. Our minds search for connections, for explanations of why this is happening. But the truth is that probably there is no explanation. This is the reality people live with here.
Posted by shona congo at 10:23 PM