This morning I read the news that Nkunda (the former leader of the CNDP) had been arrested. And then I headed out the door. As I dodged mud puddles, and trash being burned in the streets, it gradually occurred to me that there were no shops open. I looked at my watch, wondered what time they could possibly open, and cursed myself for getting out the door too early. This is probably the only time in my life when that has occurred. And then it struck me that by now, the shops really should be open. The outside vendors were all set up, with shoe displays and peanuts available on every corner, but the doors to every shop remained firmly shut.

A women came up to me saying “Nkunda, Nkunda, Nkunda…”; she said it in a mournful tone. I don’t think there are many people in Goma mourning Nkunda’s arrest, nor are they likely to be shouting it in the streets if they are, so I assume she was taunting me. As a member of the "international community", I guess she assumed that I should be a fan of his. The "international community" has long been accused by Congolese of supporting Nkunda.

As I trudged home, unable to find a single shop open, I asked a number of people why the shops were shut. I was informed by a number of different sources that today had been declared a holiday to celebrate Nkunda’s arrest. As it later turned out, there was no holiday. In fact the shops were closed because of a merchant strike related to customs taxes.

So no holiday for Nkunda. I must say, it didn’t really look like much of a holiday anyway. Apart from my “mournful” lady, no one was shouting in the streets. In Goma in the past few months, I have listened to no shortage of demands for Nkunda to be removed and claims that if only Nkunda were removed the region would be in great shape. It is understandable that people would expect a holiday today.

But I think that Nkunda’s arrest has taken the population by surprise. There was no time to plan a proper holiday. Not even a march in the street. No one seems to know what to make of the whole situation.

Yes, there have been a series of suprising turn-abouts in the past two weeks. First the CNDP ousted Nkunda from leadership. Then, despite stalled peace talks in Kenya, the CNDP, the Rwandan government and the Congolese government called a meeting here in Goma and agreed to work together. Apparently as part of that agreement, Rwandan soldiers have been permitted to enter the country. And finally a joint Rwandan/Congolese force put the pressure on Nkunda, causing him to flee into Rwanda where he was promptly arrested. All of the above would have been unimaginable even two weeks ago.

This is a place that has been longing to celebrate some sign that the war is ending. And this is a people who know how to celebrate. But I have to say, that even though there is no shortage here of people who are glad that Nkunda has been arrested, a holiday has definitely not been called. Even here, a place that would love to declare a victory, any victory, there is still a sense that we aren’t there yet.

Posted by shona congo at 5:00 AM No comments:

Sticks and Stones...and the election too

"Sticks and stones can break my bones but words can never hurt me."

I've lived here over two years. I've probably been called mzungu atleast a couple thousand times. When am I going to get over it?

My husband suggests I stop walking around. Choose my company a bit more carefully. I suppose I could. But what is the point of being in Congo, if I live behind walls the whole time? I like to be out there in the streets, I like to hear what regular people are saying...

Except that what they are saying, half the time, is mzungu...

And this is why I am thankful for Obama's inauguration today. I don't think he won because he is black, and I don't think he one inspite of being black. I think people were just too busy looking at other issues.

And this is why in the end I can't get over being called Mzungu. Because here I am, in someone else's country, trying my hardest to get to know the people who actually live here. And too often, all they can see is my skin.

A year ago I thought Obama would never be president for the same reason. 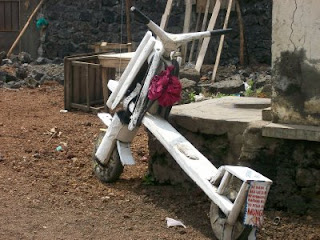 Back on the ground, here in Goma, it seems as though I never left. Goma looks the same. The UN tanks are still on the traffic circle near our house, the streets are still crowded with people, and my husband, friends and co-workers are all safe and well. But a month has passed and it seems that everyone I talk to has a story to tell.

One friend became sick while I was gone and her mother and grandmother traveled from their rural village deep in rebel territory, to visit her in Goma. They arrived safely, despite the fact that they were traveling between rebel-held and government-held territory. But on the way home their bus was attacked by gun-weilding men and shots were fired. As the passangers fled, her grandmother, an elderly woman unable to keep up with the crowd, was crushed in the chaos and has been hospitalized.

Another friend's uncle was on the road from Goma to Rutshuru, when his vehicle was attacked. He was killed and the driver was injured. He worked for an international NGO and as the story got reported over the news, that seemed to be the key feature of the report. Yet when his family told me of the death, no one even mentioned that. They have lost their father, that is all they have to say.

In another province, fighting has escalated with a Ugandan rebel group. As though Congo needs a few more crises. Yesterday I was visited by a friend who had just returned from a trip to that province. She had gone for the funeral of a relative who was caught in that recent fighting and killed.

Then she returned to her home in Goma to discover that her neighbor's house had been attacked by bandits while she was gone. Her children, who had remained in Goma while she traveled to the funeral, heard shooting during the night. In the morning they woke to discover that their neighbor's house had been attacked. Armed bandits had attacked the compound, killed the guard and attempted to enter the house. She arrived home just in time to see the guard's body being taken away.

So time passes, for those of us who are lucky. And we tell the stories.

Yet good things happen too.
For those of you following this blog, you will recall the story of the young woman who did not know what had happened to her family in Kiwanja. Over the past month, they have all been located, safe and well.

In the spirit of a new year, full of hope, we must remind ourselves of these stories too.
Posted by shona congo at 5:36 AM No comments:

A new year in the air

This year I celebrated the start of a new year suspended in air. I guess that explains the cheap price of my plane ticket. I got an amazingly good deal by scheduling my return flight to Africa over New Years. Apparently other people don't like to do this: To start the New Year with a group of strangers, in an airplane cabin, the most of impersonal places...a place where you can lose all touch with reality. A place, where everyone tries desparately to pretend they are somewhere else...anywhere else. Much like a doctor's waiting room.

Or perhaps it is the ungrounded nature of the whole endevor. How can you say you started the new year in the air... Somewhere between Amsterdam and Nairobi? They didn't even tell us where we were when the clock struck twelve. They did announce the arrival of the new year over the intercom. There was a polite round of applause in the airplane much like the half-hearted clapping at the end of the movie. In a movie theater the applause always seems a little strange. It is like at a real theater, but there is no one on the stage, the screen's gone black...who are we applauding? But at a loss for what else to do, we applaud. And so, the passengers on our flight politely applauded, as darkness passed by the miniature windows, and we strained to look down and determine where exactly we were beginning this new year.

So somehow, I enjoyed my flight over new years. Perhaps it was because it was towards the end of my journey, hope was beginning to dawn again. But there seemed something poetic about it. Talk about perspective. Perhaps this year I can start the new year with a correct view of the world. One in which I am very small, and the world seems to function perfectly fine without me. One in which you fly into the morning and the world is spread before you, covered in gentle pinks and blue. One in which the world looks peaceful.

And then you land. You know that thud when the wheels hit ground, and the sudden squeal of brakes and whooshing of flaps? That is always my favorite part of the flight. Even though it is probably more dangerous than all that time when we are soundlessly flying through the night and I was holding my breath. This is the time when the brakes might fail, when some obstacle might be on our runway, when we might find ourselves landing in the wrong place or swerving off the carefully prepared runway. But I love to hear all that noise, the groundedness of it. In the end, what freaks me out on airplanes is the surreal nature of it all. It just isn't normal. The plane is too quiet, we seem to be flying through space with no effort at all. This just isn't possible. Life is loud, and unwieldy, and I never make any progress at all that isn't full of bumps and jolts and chances to swerve off course.

So it was a nice way to start the New Year, with the gentle quiet of perspective, and the world spread out below me. But as for me, I've landed now. And I can definitely hear the squealing of brakes, the whooshing of flaps and all the chaos that this world entails. But still it is good to be on the ground.
Posted by shona congo at 8:22 AM No comments: