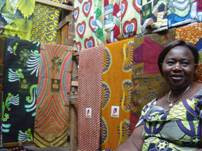 A while ago, one reader wrote...

" I'd love to read a blog about the fabrics you use for the SHONA clothing...where you buy it, where it comes from, how you choose the fabrics, what the ladies think of these fabrics (for instance, would they wear them, or do they think of them just as "American" style?)....

The cloth that we use is all bought locally. This means that I venture into "Birere", which is the most dirty and chaotic section of Goma in order to buy wholesale. I usually enjoy the venture, because there is no better way to get the flavor of Goma, but it does involve picking my way through the mud and trash-strewn streets, and pushing my way through crowds. I have come to know all of our vendors pretty well by now, so that once I make it into their shops, I find a haven from the chaos outside.

The first thing I am looking for is cloth that was made in Africa. There are many so-called African cloths that are actually made in China or Thailand. They are usually copies of cloths designed in West Africa, so that they look "African" even though they aren't. This is particularly difficult because even when cloths are made in Asia they are often printed to say "Real Nigerian Cloth". I have found a couple vendors who I am pretty confident are selling real African cloth, so I try to stay with them.

The next thing I look at is the color and design. Goma is a great place to buy cloth. They have a wide variety of beautiful, striking cloths here. But I must admit that my first choice of cloth is often not quite the same as that of my Congolese friends. For Congolese taste, it is all about the most bright, bold, and shiny new cloth available. Just like fashion followers in the US, Congolese women are looking for the hot new design that no one else has yet. Some of these cloths have wild assortments of colors, and the concept of colors "matching" seems to have a taken on a whole different meaning here. Some of the designs are also quite wild. There are quite a number of cloths that feature images of household items. There is one that has the design of a large television set. And another that features a fork and spoon. I have yet to figure out how to work these cloths into our products!

Which brings me to an interesting point. Our American customers generally want to buy something that looks "African". It is the Africans themselves who often want American looking cloths. People here like the cloth with the television set because to them it is a sign of westernization, of money and success. People like the cloth with the fork and spoon, even though culturally, they usually eat with their hands. In fact there is a large selection of cloths that I never even look at, because they look too American to me. They are usually large floral patterns, in bright pinks and oranges. They look like they belong in my grandparents house. To me, they look exactly like curtains from the fifties. However no one here has those preconceptions, they just look like pretty flowers to them. And so they are popular for clothing, even among the young and hip. So ironically, my problem is often not that cloths are too "African" but that they aren't "African' enough.

There are also a large number of religious cloths here, which might make nice wall hangings but are often used for clothing. They are printed with images of Jesus, or Mary, or the Pope. Being that these are usually worn as wrap-around skirts, you can imagine the amusing outfits we often see walking around Goma. The Pope's image, in all seriousness, often appears directly on a woman's backside, and seems to move up and down with the movement or her walking. It is a whole new way to bring pictures to life.

The SHONA women have been working with me for a while now, and have gotten pretty good at predicting what types of cloths I will choose. And often we do like the same cloths anyway. But still, if you want to know what kind of cloths the women would choose themselves, you will see soon enough. Starting in September, our craftspeople will be choosing the cloths themselves. So make sure you stay tuned...you might just see some cloth with television sets after all!
Posted by shona congo at 8:47 AM

You could always use the fork and spoon one for placemats or aprons!

Great article, Dawn! That's fascinating! I'm surprised they don't have a cloth with cell phones on it!! :)

Lynn - I HAVE seen African fabric with cell phone print.