We have just begun to train our two new interns, Riziki and Solange (pictured above). They are incredible young women, both handicapped from polio, who truly deserve the chance to become independent craftswomen. For this month it will cost us $100 to train each intern and provide for her living expenses. Would you like to sponsor one of these women? We are accepting donations for any amount that you would like to contribute, and will provide you with specific information about how your contribution is being used. Follow this link...


Can you imagine growing up in a war-zone, as a young handicapped girl, barely able to walk? What you must realize is that the war in Congo is not a war fought with battle lines and tanks, a war in which there are clear lines between civilians and soldiers. The war in Congo is ugly, in every sense of the word. It has seeped into the daily fabric of life, destroying every place of refuge. What war means to the people of Eastern Congo is that soldiers (from any number of waring groups) may appear in their village and in their homes at any time. And too often those soldiers will steal their crops, burn their home, and rape the women and girls.

And so people run. But how do you run if you are handicapped?

Argentine, one of the SHONA women, tells incredible stories of her mother. As a child, Argentine was completely unable to use her legs at all. She grew up in Masisi, a beautiful area of Congo which has been the ravaged by war for years. As the war grew worse and neighbors and family members fled, Argentine's mother faced perhaps the most difficult question a mother could face. How could she protect her oldest daughter and her younger children with no money and no means of transportation?

She went to the forest and looked for a quiet place. She dug a ditch and surrounded it by branches. Then she carried Argenine on her back and placed her in the ditch. She told her, I have to leave to look for food, but I will return every two days. Stay here and stay quiet. No one will see you. If i don't return after two days, go and look for help. God will protect you. But Argentine's mother always returned. Argentine stayed in that ditch for months at a time, and today she credits her mother for saving her life during that time. What a terrible story of war, but a beautiful story of a mother's love.

But what happens when you have no mother to carry for you?

Solange, our new intern, has this story. She grew up in the same war-torn area as Argentine, and with the same inability to walk. But her parents died when she was a child. Her grandmother and aunt cared for her when they could, but there came a time when everyone had to run. And she was left behind. Her relatives told her to stay in the house and she would be fine. And so she stayed all alone in the house as the world ran away. Soldiers eventually arrived. Miraculously they didn't touch her. They stole some things and then asked her why she was still in the house. They told her that she had to leave, because others would arrive and they wouldn't be so kind. So she made her own way to a small forest near her house. And hid there.

Eventually Solange made it to Goma and was treated at the Handicapped Center. She has just completed four years there, during which she underwent an operation to straighten her legs, learned to stand again, learned to read and write, and sew. Last week, she graduated from the Handicapped Center, and was required to move out. And yet again, she was faced with the question of where to go. She has no home to go back to. It has been destroyed by the war. Her two siblings live in a refugee camp, along with her aunt. And yet she has learned a skill, and she is ready to begin a life on her own.

But she is not alone. Argentine and Mapendo are here to help her on her way. Solange and Riziki have moved in with Argentine and Mapendo, and are working side by side with them, to train them. They are teaching them classes, monitoring their progress and guiding them each step of the way. We hope that at the end of the internship, the women will be able to join SHONA as full-time craftswomen.

But this part, the internship, is what it is all about. I have spent a year and a half working with Argentine and Mapendo so that one day that would be able to teach others.

We could have grown a lot faster. We could have added interns sooner and brought in "experts" to teach them. But I wanted the SHONA women to become the teachers. That takes time, and it takes a lot of training.

But I truly believe that this is the way forward. These women will make the best teachers because they have been there themselves.

After all, they are the ones who hid in the forest. They deserve to be the ones to lead the way out. 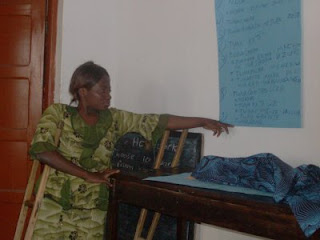 Argentine is teaching Riziki and Solange. You can't imagine how long it took her to prepare that poster, but she did it herself.
Posted by shona congo at 5:07 AM

That's great that you've made an opportunity for internships! And the opportunity for Argentine & Mapendo to be in charge of their education is also a great idea. I'm happy to donate!

Thanks Lynn! Your enthusiasm and your donation are both much appreciated.