The roads in Africa 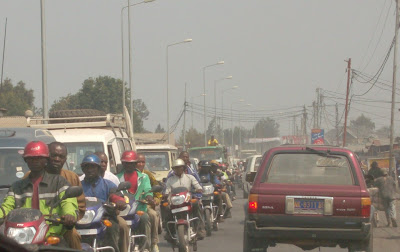 When I first moved to Africa, the thing that struck me most was the roads. Or rather the lack there of. Ok, I know, this is not what makes for poignant imagery of Africa. I mean no one has ever said to me "oh, so you are living in Africa....What are the roads like over there?"

But that is because we have grown accustomed to our richness. Our overabundance of roads I mean. Believe it or not, I have been asked the reverse question quite a few times with thoughtful looking Congolese faces peering at me and asking "what are the roads like in America?"

The roads in Congo are notoriously bad, even for African standards. It is estimated that Congo has 300 miles of paved road in the entire country. This is a huge country, 1/4 the size of the US. The US has at least 5.7 million miles of paved roads. hmm...

This leaves cities like Goma, with perhaps 800,000 people living in them, and one paved road. These pictures are of the main road in Goma. It is a two lane road, eaten away at the edges and crowded with at least 5 lanes of traffic, including two lanes of cars, at least 2 lanes of motorcycles and pedestrians on both sides. Now the word lane is quite deceptive. Please do not take this to mean that there is any order at all. The motorcycles and men pushing wooden cars weave all about, the cars sit in traffic and honk, and the people endeavor to actually cross the road and reach the other side. 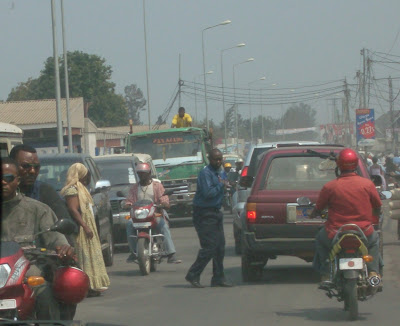 But this is not the problem with roads in Congo. The problem is that roads, even such as these, often do not exist, or are simply unusable. Years of neglect mean that the roads built during the Belgian colonial period are collapsing, and during the intervening half century, very few new roads have been built. Add on top of that the high levels of armed robbery,and check points manned by a variety of rebel groups and government soldiers, and traveling by road simply becomes untenable.

Here, in the tiny town in Kansas which we are visiting, my eyes keep being drawn to the roads. The roads seem laughably wide, probably because of all the farm equipment that needs to make its way through. But I still can't help thinking "this town's got some good roads!" 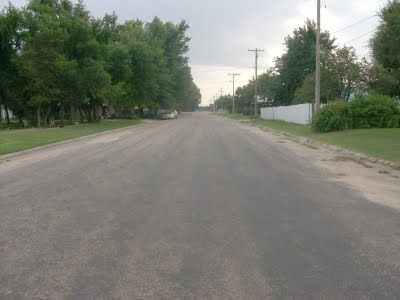 So as you make your way down the road today, as almost all of you will, maybe you will take a second glance at the road stretched out before you and begin to see it in a whole new light.
Posted by shona congo at 6:55 AM