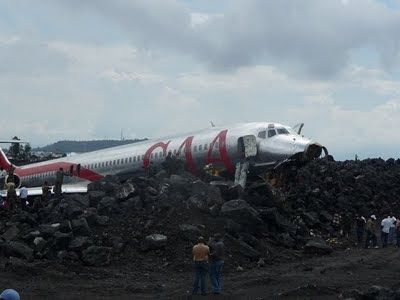 This week a plane crashed in Goma. It is neither the first nor will it be the last, in this town where the only major runway is cut short by hardened lava. Many of the planes that fly into Goma are too large to safely use such a short runway, and yet the air traffic continues, because after all, what other option do you have in a country where the roads are often cut off by armed gunmen demanding payment for passage. During the three years we lived in Goma, there were at least 2 fatal plane crashes, and now here is one more to add to the list. Thankfully it appears that all the passengers and crew, as well as the people on the ground, have survived this accident, although some injuries have been reported. In last year's crash many people died not only on the plane but on the ground because the plane plowed into a crowded market area. This time, it appears that the plane did not reach the market area. However, yet again, this should draw serious attention to the fact that Goma's runway is too short, and is situated directly next to Birere, the most crowded market area in Goma.

There are many serious safety issues in Goma which are difficult to address, from the war to the active volcano to the gas in the lake. But one is left to wonder how there can possibly be so much money to facilitate countless flights into and out of Goma each day, carrying both passengers and valuable cargo, and yet no funding to make the runway longer or the airport more safe. The people of Goma already have enough to worry about. Why should they have to fear being run over by an airplane while they sell produce at the market?

The airport in Goma is a disaster. And it is not just waiting to happen. It has already happened. We saw it in 2007. We saw it in 2008. And we see it now again. We ought not feign surprise when something goes terribly wrong.

Below is a report from a young man in Goma, who also submitted the picture above.

"This is to inform you that at approximately 11H55, a CAA commercial passenger aircraft failed to stop on the runway whilst running landing at the Goma airport consequently crushing on to some lava rocks. The air crash was accompanied by a huge sound which reverberated all over Goma town sending a wave of panic amongst the local population.

Pursuant to the air crash, MONUC aviation, MONUC military and UN Security rushed to the scene of the accident for purposes of rescuing the injured and traumatized passengers. It was immediately observed that other than some broken wings, the body of the aircraft's fuselage remained intact and undamaged and there was no fire around the area.

All the 117 passengers on board were safely helped to disembark from the aircraft. Preliminary reports indicate that one passenger was found unconscious whereas 20 others were in a state of shock and with minor injuries and bruises.

Note that the governor of the province of North Kivu, Sir Julien Paluku was aboard this aircraft.

MONUC ambulances helped to transport the injured to the level 3 Hospital in GOMA."

thats amazing why is it that the carriers do not use a smaller aicraft like the Dash 8 or the F100 jet?

Its a sacry thing i was in what was recoreded as a "Shoort or hard landing" last week its not much fun.

Given the road situation and the amount of cargo and passengers that need to go into and out of Goma by plane, I guess it makes "economic sense" to have the larger planes.

And as you point out, conditions at many airports throughout Congo, and throughout Africa, are terrible... so I guess there isn't too much of an expectation of something better.

What do you plan to do in Congo, Podge? Do you know where you would be? Have you ever been before? PNG looks fascinating, and I am sure it would be an interesting comparison between the two.

I cannot believe that this is still happening, how many plane crashes until something is done. My business partners and I have visited and inspected the runway twice this year and have given German Aggro Action the solution to this problem back in Feb this year using a South African
product. This product has been tested on the lava successfully last month. WHY WHY wont they use it!!!!!!!!

It is wonderful that this story has been posted. I just hope that the government hears about this and try to make some changes.