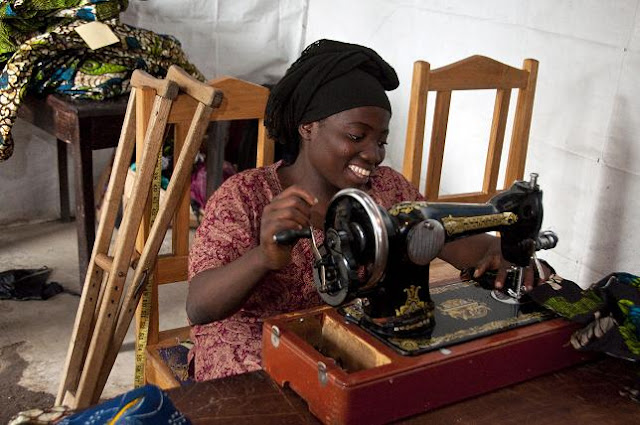 I rarely post a rant...but...this one...the more I think about it... it keeps getting under my skin. We got an email from a non-profit organization asking for permission to use this photo of Argentine, they had found, from years ago. The email said "asking your permission to use the photograph of an African lady with a sewing machine and crutches alongside in a leaflet to raise funds for ‘Empowering Women with Disabilities in East Africa’."
Props to them for finding us and asking for permission.
Clearly they are trying to do it right. But frankly, I just don't understand. The organization has ongoing work in a number of East African countries. If they are working there, shouldn't they have photos from their own work?
The organization has an annual income of over $800,000, I am sure they can afford to get a photo of the excellent work they are doing. And if not, perhaps they should focus on the excellent work part first.
The message leaves me asking "Don't they already know anybody with disabilities in East Africa? Haven't they already built a relationship with them? If not, how do they propose a program to "empower" them? "
I think this is actually a common mistake in the non-profit world. We are starting backwards. We propose the program first, raise the money, and then go around and look for the people to "empower". That is not empowerment, at least not for the people on the ground. Maybe it will be good work. But let's not call it empowerment.
When we see empowerment backwards, what we miss is where it starts. We come to believe that it starts from the outside, and particularly that it starts from us.
They asked for permission to use this photo of "An African lady with a sewing machine and crutches" That is what bothers me. I have never thought of that photo that way.
To me that photo has always been a photo of my friend Argentine. And I am guessing that it is to you.
I know that if I asked, you could tell me all kinds of things you know about Argentine. Where she is from, where she lives now, the way she sings, her daughter's name, her incredible smile and laughter, the tragedies she has experienced.
I think it is important to know all of that. Because it reminds us of where empowerment starts, and what this photo is all about.
As a child, Argentine never went to school because of her disability. And yet she would sit and wait for all the other kids to come home from school, and she would call them towards her with her smile and her laughter, she would tempt them towards her with her incredible personality. And then she would ask them what they learned, so she could learn it to. She was teaching herself in the only way she could. For as long as she has lived, Argentine has been using every tool in her possession to empower herself. And she is still doing so today.
That photo, you see, it isn't a photo that should raise funds. It is a photo that should raise awareness...of the talent, and dignity, and joy that belong to Argentine. She owns her own empowerment. And she owns that photo too. Let's start from there.
(photo credit to Molly Feltner who took this and many of the other beautiful photos of Argentine, Mapendo, Riziki and Solange)
Posted by shona congo at 7:54 AM