A house built on faith 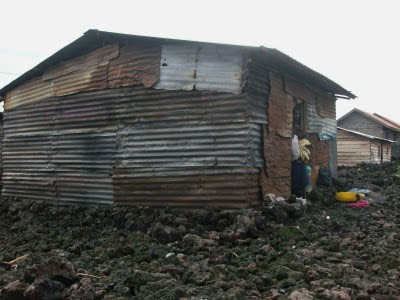 This is Roy's house. A couple weeks ago he had to pick it up. And by that I mean...actually pick it up and carry it somewhere else. His family was forced to leave the land they were living upon. They had to take apart their home and carry it to a new location.

When we talk about insecurity in Goma, we think about war and armed robbery and the general chaos which can overtake the region.

We don't necessarily think about picking up houses.

But this too is part of the insecurity of life in Goma. The vast majority of people in Goma live in this type of perpetual non-permanence. This awareness that at virtually anytime, you may be told to move. Even if that means picking up your house.

Roy built this house about a year and a half ago, on top of this pile of lava rock. He paid about $10 a month to rent the land on which he built his house. That worked out for a while, until the owner of the land decided he wanted to take back the land and build on it himself. And so Roy's family had to move. As in, they had to move the house. So they looked for another piece of land to rent, they dismantled the house, and carried it on their backs to the next location.

So now they are living in the same house, on different land. And you can imagine how long it will last this time. If they are luck another year? People in Goma get used to picking up and moving a lot.

True, there is nothing that shocking about the transitory nature of life in Goma. Goma is a city, largely composed of people who have fled there, from the surrounding areas. It is full of people who have had to pack up and leave, again and again. The city itself has been overtaken by soldiers, rebels, and lava at varying points in the last ten years. In Goma, one most always stand a bit poised on the edge of departure.

What I find most striking is that Roy built the house in the first place. He could have rented a a similar house. But he chose to build a house on land that he did not own. Of course options were limited. If he could afford to buy land, he surely would have.

But think about it for a minute. Imagine renting a plot of land and building your own house. With your materials, your own money, the sweat from your brow.

No one does that in America, because who would take that risk? We build on land that we own, or we rent a house on land that we don't. No one goes through the work of building a house if they can't own the land.

It gives me pause.

Roy knew that building on borrowed land was a risk. But what in Goma isn't a risk? Actually it was more like guaranteed non-permanence. You build knowing that in the not-so-distant-future you will have to take it down again. Or maybe the volcano will erupt again before that happens, and cover your house with lava. Or maybe the war will explode and you will be forced to leave your home and flee. You see, when everything is a risk, it almost becomes beside the point to try and calculate risk at all. What's built today, what stands today, is really all that you have the energy to think about it.

So Roy, picked up his house and moved it to a new plot of land. Let me not understate this. By no means was this an easy process for his family. Yet he will probably face it again next year, and the year after...

It is a living example of the insecurity of Goma. The poor move again and again, as landowners try and turn a profit on their land. Community breaks down when a population is constantly being forced to move from one place to another.

But it is also an example of the extraordinary sense of hope and determination in Goma. Even if you are simply too poor to buy any land, you'll start by buying the materials to build. What greater evidence of hope is there? Maybe you will own a roof and walls, long before you ever own a place to rest them upon. But in that there is a determination to believe in a better future.

In Goma, where the ground is constantly shifting, you learn to build your home on moving ground. It's not blind faith that the ground will stop moving. It's the knowledge that that it never does. And the determination not to lose hope in the midst of it. I suppose, in the end, that is the type of faith we are all called to.

"What you spend years creating, others could destroy overnight. Create anyway."
Mother Teresa 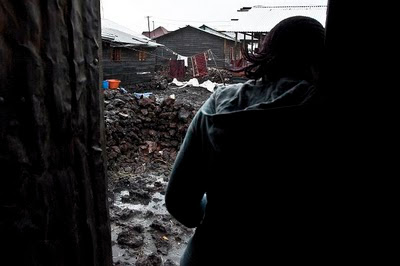 Very great blog, 10. That blog has created good, congratulations!
I am Javi de Esapña present and I would love to visit my blog is www.javiervg12.blogspot.com