Translated, that is
"Mapendo's brother-in-law died without being sick. Pray for us."

I promised the SHONA ladies that I would pass along to you this request for prayer. So there it is.

Here is the backstory...
Mapendo's brother-in-law died suddenly. He had not been very sick, although he also had not been feeling particularly well as of late. He went into the bedroom to lie down, and when family came in later, he was dead.

He leaves behind his wife (Mapendo's sister) and 10 children (8 of their own and 2 orphans they care for). The oldest child is 20 years old and the youngest is a year and a half old. This is a huge responsibility for Mapendo's sister to bear.

Inevitably, this responsibility will come down not only on Mapendo's sister but on Mapendo as well. One of the children was already living with the SHONA ladies. You may remember that she came to help the ladies around the house. Their sewing has paid for her to go back to school. 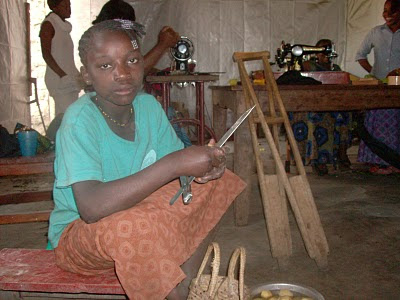 Mapendo's sister will struggle to provide for these children. And in one of the great injustices of life in Congo, she will also face attempts to take away her home, or anything else that she might have. When the Bible talks about fighting for the rights of widows, I never really took it literally. I didn't realize precisely how vicitmized widows can be in cultures, even today. But in every death that I have seen in Congo, the widow has faced an onslaught of pressure and the fear of losing the little that she has.

In addition to all of this, this idea of "dying without being sick" has a particular undertone to it. When people die of no clear cause in Congo, they are often assumed to have been poisoned by someone. This is a particular tragedy in Congo, where healthcare is extremely low, and the ability to actually diagnose illnesses is very limited. While there are real incidents of poisoning in Congo (and around the world) there are also many, many incidents where people just die. When you have no medical equipment to diagnose problems, and no investigative police to diagnose crime, the two are often confused. In a world where tragedy hits so often, we grab onto any explanation we can. And unfortunately, the poisoning explanation is often the most readily available. It may be hard to prove, but it is also hard to disprove.

Congo can be a hard place, full of inexplicable tragedy, and uncertain fear.

But it can also be a place of beauty. Where a community comes together to carry burdens. The SHONA ladies have been sleeping at Mapendo's sister's house for days now. Mourning with them. They heard of the tragedy, put down their sewing materials, and went. This is a common Congolese response.

You notice that in their message they say "pray for us." This is not a selfish "us", as though they are the ones who need prayer. It is an inclusive "us", a recognition of their place in a community, a community whose responsibility it is to now carry this family, and bear their burden together.

I rarely say "pray for us". In good American fashion I say "pray for them". As though a person's loss or struggle is somehow separate from my own. I should practice saying "tuombeye"("pray for us"). Perhaps it will serve as a reminder to myself that, in reality, we are all in this life together.

Sharing our burdens and our joys.
Posted by shona congo at 5:32 AM

This is so sad! I am really sorry to hear about this. May the Lord strengthen us, in Jesus' Name. Amen