Argentine On The Way Home...

In my mind this is really the most unbelievable story.  And yet entirely true.

As many of you know most of the SHONA Congo women left the refugee camps and returned home to Congo a year and a half ago.

But 1 woman, Argentine, chose to remain in the refugee camp in Burundi with her young daughter. As a single mother she felt it was the only way she could keep her daughter safe. 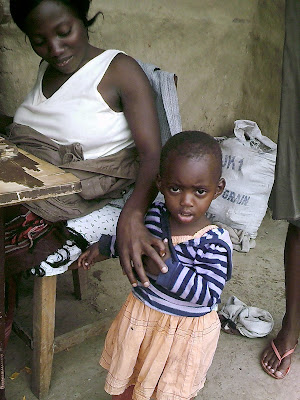 That was until a few weeks ago, when the President of Burundi declared he would run for another term in office, and strong opposition began to take to the streets.  Argentine called and said that she needed to get out of Burundi before the war broke out, but she couldn't find a safe way to leave.

Imagine that... sitting in a refugee camp, having fled the war and insecurity in your own country, only to be threatened by war breaking out in the very place you have taken refuge. 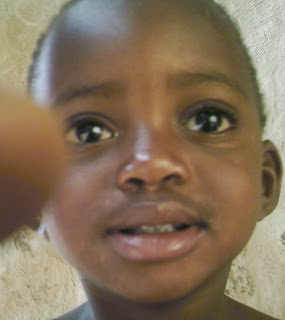 Imagine sitting in a refugee camp and looking at your 2 year old daughter, who was born in that camp. 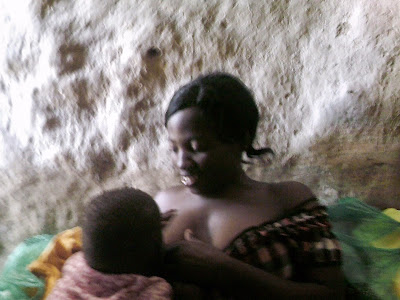 Then looking down at your legs, covered in metal leg braces and the crutches that lay by your side. And then glancing at the work you have done for the past 2 months. 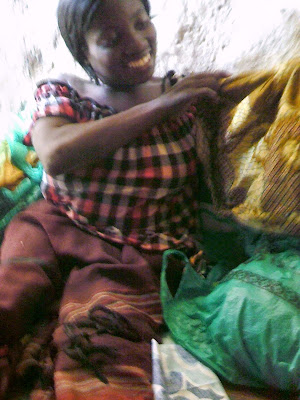 Seeing the 80 bags that you have carefully sewn, and packed, ready to send to America.  And hearing that the roads are closed, and that fighting will break out any time now.

What do you do?

There was a moment of relative calm last week where Argentine saw her opportunity, and fled.  She fled with her daughter and her younger sister, a little of girl of about 8 years old, hanging on to whatever they could. 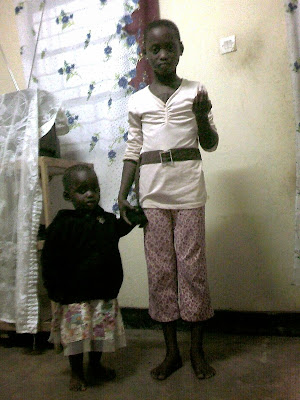 They fled  to the capital of Burundi, where they found all the businesses closed and they were unable to mail the giant bundle of SHONA bags that they were carrying with them.  So they just kept going. 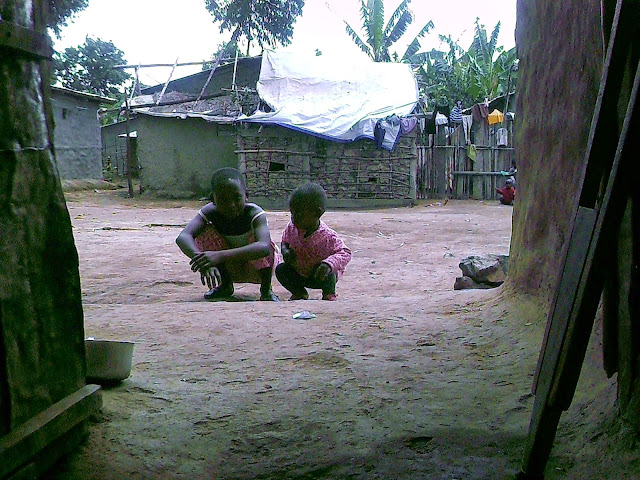 Argentine and the 2 little girls climbed on a bus with their possessions and their SHONA bags and made it to the Congo border.  They breathed a sigh of relief as they arrived at a town in Congo where a friend had offered to let them stay for the night.  But they found the house crowded and knew they had to push on, to make it back to Goma.  They borrowed money from their friend to buy tickets on a bus to Bukavu, the town across the lake from Goma.  When they made it to Bukavu they would climb on a bus for the last leg of their journey.

They breathed a sigh of relief as they sat on that bus.  But halfway through the journey that bus suddenly stopped.   Argentine peered out the windows and grabbed the little girls closer as she saw the streets had been blocked by angry protesters.  The population was rioting.  Angry people clambered on board of the bus and began to beat the bus driver.  A few Congolese soldiers happened to have been traveling on the bus.  They slipped out the back and went to look for more soldiers for help.  Meanwhile the angry population began to make its way through the bus, roughing people up, demanding all that they had.  Argentine grabbed her little girls tighter and began to pray.  She had only enough money on her to pay for their boat tickets for the final leg of the journey home.  What would happen if they took that?  The crowd got to Argentine.  They picked up Argentine's metal leg braces, which she had taken off and set to the side for the journey.  Without those braces Argentine cannot stand.

And then somebody said "she's disabled.  Leave her alone."


Argentine glanced to the heavens and heard a thump from the roof.  People were on the roof of the bus, pillaging through the luggage that had been tied to the top of the bus.  SHONA's 80 bags, all of Argentine's work for the past 2 months, were up there.

And then she heard shooting.  The soldiers were back, this time with reinforcements and as they fired into the air the crowd began to disburse.  Argentine hugged her little girls tighter.  And someone started the bus again, and they fled down the road. Hoping this time to find an empty road to travel home.

Here is the crazy thing.  This happened in Congo.  Remember how Argentine was fleeing the unrest in Burundi?  She was right to flee.  Yesterday a coup was announced in Burundi and it is unclear what will happen next, but it is hard to imagine that it won't involve continued violence.  But when Argentine fled the refugee camp she fled back to Congo, and as it happened, she stumbled right into another conflict.  It isn't even the same conflict that plagues Goma.  It was local unrest that Argentine could never have forseen.

Argentine had fled her home country, found a refuge, only to find her refuge threatened with war, and as she fled that refuge back to a home that still remains insecure, on the road home,  she stumbled into a 3rd conflict.

And she did all of this with 2 little girls, metal leg braces and crutches, and 80 SHONA bags. 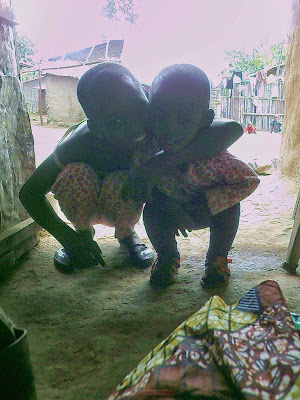 When they finally did get off that bus in Bukavu, Argentine climbed out and looked at the roof.  And there was the bundle of SHONA bags, untouched.

Argentine asked me to tell those of you who pray, that your prayers matter.  That she should have died.  That she thought they were going to.  That those bags should have been lost.

But somehow, they have made it home.  Bags, and little girls, and mama.  They are back in Goma.  It was a long road home, but they made it. 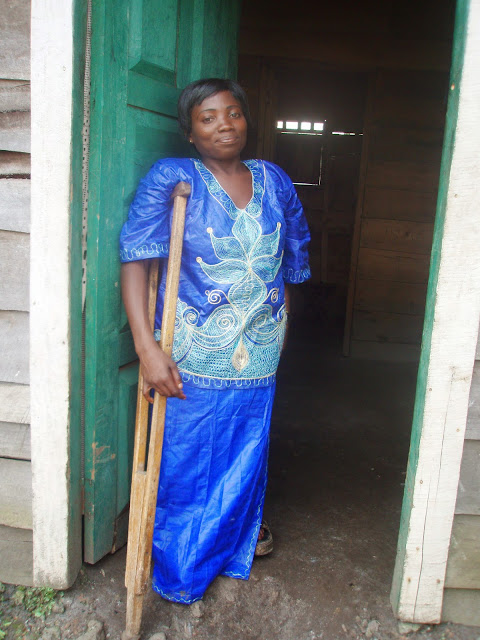 The bags that Argentine sewed are her income from the last 2 months.  That money that has carried her home and is keeping her and her daughter and sister fed and safe.  Your purchases matter infinitely.  Support the work of the 4 amazing women from SHONA Congo as they continue to fight for stability, safety and hope in the midst of chaos. 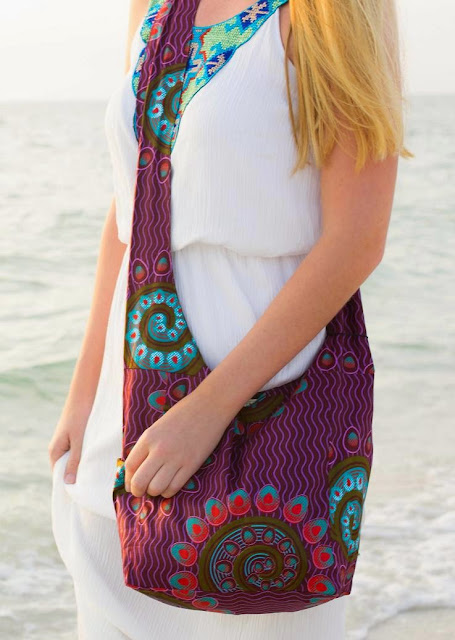 I don't know how I missed this post. I am just now reading it almost a month later, and am just in tears. I am so thankful for Argentine's safety.

Thank you for sharing this story of survival. May the Lord God grant lasting peace to my country. Enough of this!