The strangest of wars 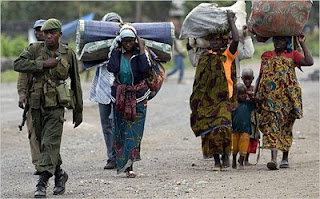 Check out the the
NY Times Article that was on the front page Thursday.
This is the strangest of wars. Two days ago the US embassy sent out text messages to American citizens stating that the embassy was evacuating all it's staff in Goma (as far as we know, it has none) and that American citizens should leave immediately by all means possible. We had already left, as I am sure everyone else had as well.

Today we were sent a message stating that things are relatively calm in Goma and we should feel free to go home or to work. Hmm...

The people of Goma have woken up today after a relatively calm night, and are hopeful. The sun is shining and maybe the rebels have gone away. Or something. Maybe an agreement has been reached, we know high level negotiations have been going on.

But you can't help but wait for the other shoe to drop. And you can't help but feel like this is a game. A terrible game, in which way too many people have died. Why did Nkunda reach the outskirts of town and stop? Leaving the town with a vacuum of power and opening it up to a terrible spree of lootings and killings. Was it a show of force? To put him in a good negotiating position? Because he didn't want the humanitarian catastrophe of Goma on his hands? Or is he simply waiting?

As for right now, my husband has crossed the border to scope Goma out, see how things are looking. We'll see what news he brings on his return and go from there.