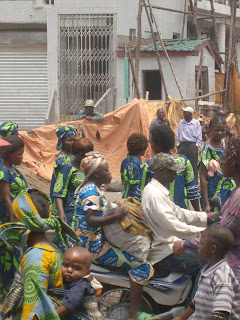 We have friends who are anarchists. Christian anarchists to be exact.

They are incredible people and I find many of their positions quite compelling. In many ways I agree with them. They argue

"When Christians engage with the political arrangements of the world, be it communism, socialism, capitalist republics, they have often claimed that their political option is the Christian one, and demonized other arrangements. This is the nature of politics, to divide and conquer. Beyond this, when Christians engage in politics they often sell out the Gospels, particularly on the issue of violence. "

I agree strongly with the difficulty of defining a Christian political stance or even a Christian form of government. The way that Jesus calls his followers to love their enemies and turn the other cheek is truly counter-cultural, and I have yet to see a form of government that encompasses this command. And it is true, in America and around the world I have cringed at many of the stances that have been taken in the name of Christianity.

August Spies, an anarchist, states "anarchy does not mean bloodshed. It does not mean robbery, arson, etc. These monstrosities are, on the contrary, the characteristic feature of capitalism. Anarchy means peace and tranquility to all."

I find myself thinking about this question often here in Goma, a place where it often seems that everything has failed. Goma has become the murder capital of Congo. People from surrounding towns speak of Goma with a note of fear in their voices and often comment that Goma is the place where people kill eachother "ovyo ovyo" (without order or reason; any old way). And it is true. Here in Goma the war is no longer at our doorstep (although fighting and reprisal killings do continue in many other areas). But even without the war at our doorstep, armed robberies and killings continue to dominate the night. The town shuts down at dusk. I had perhaps lost touch of how strange this is, until we recently were in Rwanda and I was shocked to see all the people milling around the streets at seven or eight o'clock at night. By that time in Goma everyone is locked into their houses and no one wants to open the door for anyone. Who knows what will be on the other side?

This sense of violence and insecurity reaches deeply into the culture here. Recently I listened to to a situation where a person working in an office should clearly be fired. There was ample evidence to support his dismissal. However he won't be fired because people in Goma are afraid. This is a town where people are killed in the night, over cell phones or $20. But they are also killed out of jealousy or an argument at work. No one wants to have enemies here because there are no protections from them. It is simply easier and safer to close your eyes to the mistakes that a person makes, and the wrongs that he does. If you are the one to call him out, you may well pay a price. And this returns me to the question of anarchy. Without the protections of a functioning government, without a police system and a justice system that work, it seems to me that all too often this is where we end up. Everyone ends up locked in their houses, unable to come out to help a neighbor, unable to speak up against wrongs that are done. I often think of "Lord of the Flies" here. The book imagines a group of Brittish boys stranded on an island, and the descent into chaos that follows. After demonstrating the way that the boys destroy themselves when they are forced to function without the rules and order imposed by society, the book ends with the line "Ralph wept for the end of innocence, the darkness of man's heart..."

But it is not really that all of those boys had dark hearts, nor is it that the people in Goma have dark hearts. It is just that even without the structures of state, the strong still dominate the weak, and fear overcomes community. As the anarchists say, systems of government can be used to dominate people: to make people afraid to speak out, afraid to demand justice or seek a better world. And that is something we should fight against. But I am sorry to report that even when the systems of government have been removed, people step in to fill the void. With or without state structures, men with guns always seem to reappear to create their own system of domination. Check out Somalia.

Congo is sometimes described as a failed state, like Somalia. But in both cases what is important to realize is that it is not really that the state doesn't exist so much as that it has been hijacked.

There are so many soldiers here, representatives of the state, with weapons paid for by the state. But the soldiers haven't been properly trained and they haven't been paid for months. So they pay themselves. For a fee they can be hired to rob or kill almost anyone you would like. The fee isn't really that high because they will make up the difference in what they can steal from the house. This is why people are afraid here, it has simply become too easy to kill eachother.

So is Goma an example of the failures of government or the failures of anarchy? In some ways Goma is the worst example of both. It is both government gone wrong and anarchy gone wrong. The question remains can government go right? Can anarchy go right? I am still thinking about anarchy. But as for government, I can say that for all the things wrong with the governments in the US and in Europe, many things have gone right. Living here, in a world where I can't leave my house at night, has made me reconsider some of the ways that the American police and justice systems do work.

If you run into me in the US, when I am living in New York City and trying to find the most radical politician to vote for, I will be happy to list for you all the things that are wrong with our government.

But Goma, as always, is a great place to look at the world from another point of view.
Posted by shona congo at 11:45 PM

Interesting observation. First time I read your blog. Found it through edith living in Africa. Are you also on twitter sometimes? I found a blogger, Joseph Yav Katshung http://www.joseyav.com/ArticlesPublications.html from Lubumbashi sometime ago. Did you try Ushahidi when it was experimenting in Kivu?

A blog award - Honest Scrapper - for you.
Rules are in my blog.
You deserve it!

Extranjera, Thanks for the honest scrapper award. Isn't that ironic. I am eternally frustrated by all the things I cannot say in my blog. Well, hopefully I speak honestly on the subjects I am allowed to speak on.

Hi Colored Opinions. You have a fascinating blog that I will be sure to keep my eye on. THanks for finding me. Yes, I am officially on twitter but I have no idea what I am doing there. I noticed you have a million (well, something like that)followers on twitter, any suggestions?
THanks for suggesting the blog from Lubumbashi, I enjoyed checking it out. It is great to see some blogging coming out of Congo.

Yes, I did use the Ushahidi site a couple times when things started heating up here. Seems like a great idea with a lot of potential.