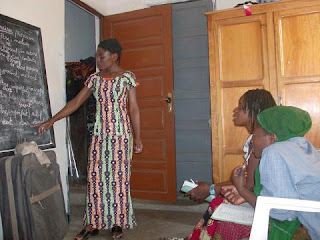 Je suis en retard.
That pretty much sums up my experience of learning French here.
(I am late...or perhaps more applicably...I am behind)

I worked on learning Swahili first. For which I am forever grateful. Swahili wasn't too hard, especially the version of it that is spoken in Goma, in which many conjugation rules are simply ignored. Of course, I am far from perfect in the language. But it is what I use to communicate with almost everyone, almost every day. People here are generally thrilled to see a mzungu who is trying to learn Swahili and it is undoubtably helped me form relationships with people here.

None the less, I should really know French by now. But French has a million rules. And no one is thrilled when you try to speak it. They just wonder what kind of mzungu speaks French so badly.

So I know how the SHONA women feel. They also have not learned French. Argentine didn't attend school at all as a child, and the others attended only briefly. It is a hard language to learn. And it is frustrating to start from square one trying to learn a language that you wish you had learned a long time ago.

But languages are keys to so much in this world. Argentine and Mapendo traveled to Rwanda to play in a handicapped sports competition last year. They returned demanding to learn French and English immediately. They had meet all these wonderful, lovely people from Europe who gave them gifts, and wanted to speak to them, but they had no common language. Argentine and Mapendo said it is the worst feeling in the world to want to thank someone and to be unable to. They wanted to thank these generous people for their gifts of crutches and backpacks, but literally did not have the words to do so. Somehow I suspect their smiles translate into all languages.

But you can see them here, half a year later, dutifully struggling to learn this difficult language, determined to build that bridge. 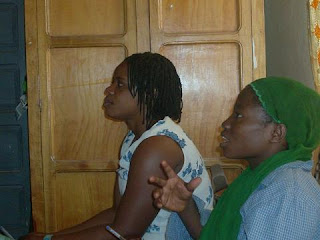