The tin shacks of GOma 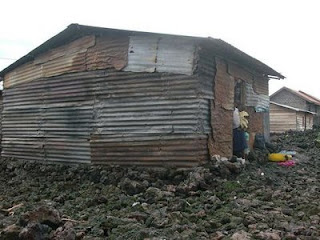 The lava rock has been more or less cleared from inside the house, leaving a dirt floor, with occassional rocks jutting out. There is no electricity and no water. The "jerry can" containers in the forground of this picture are used for carrying water to the house, a job done mostly by the girls in the family.

The house is divided into two rooms. The "living room" is shown in the picture above. The second room is a bedroom, the same size as the living room, where Roy and his wife sleep with eight children. They own one single mattress.

I show you these pictures not to make you feel bad for Roy. Everything is about context. Roy's family recently moved into this house. For them, it is a step in the right direction. Their last house didn't have enough tin to cover the walls or the roof, and it was in a worse location.

I show you these pictures to give you an idea of what life looks like in Goma. The average person in Goma lives in conditions similar to Roy's. 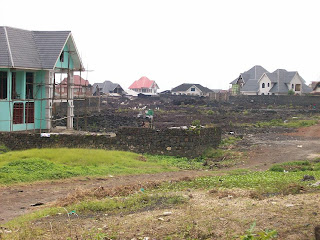 And yet there are whole neighborhoods that look like this. There are places where the skyline is full of the sloping roofs of these "McMansions".

If something burns me out in Goma, it will probably be this. It is this daily encounter with human nature. The ability of man to build a mansion next to a shack. Morever the ability of man to surround his mansion with a wall, buy a large water tank and hefty generator, and never have to deal with the reality that there are no public services in Goma.

Where does the idea of public services come from? The idea that there are some roles that government should fill, and some needs that are so basic, they must be addressed. In the US we are often afraid of "Big Government". I know that these days people are thinking heavily about Obama's big spending, and about the level of debt we will incur. And we should think carefully about such issues. I also know that the proposal to spend billions of dollars is motivated by a concern for the economy rather than a concern for public services. But everytime I hear about that money I can't help dreaming about all the railroads that could be built, bridges that could be repaired, libraries that could be stocked, parks that could be maintained and the like.

I can tell you that there is not a single park in Goma. Nor a single waste removal company, nor a single sidewalk. I would like to believe that it is in human nature to come together and try and make the place we live better, even if there is no government to do it. I would like to believe in a commitment to the public good. But I can tell you, that it is much easier to build a wall and fix up your own compound. And, when left to our own devices, I'm afraid that is what we tend to do. There are an awful lot of walls in Goma. In fact if you look carefully at that picture of the McMansions you will see the very same lava rock that covered the land outside of Roy's house. In this case, someone has taken the time to pick up all those lava rocks. They are using them to build row after row of walls.
Posted by shona congo at 12:37 AM

My Africa is also a disconcerting dichotomy of close knit families and communities on one side, and walls (often with electricity) on the other.
However, on our visit to Soweto on Saturday I learned a new reason for the said walls in Soweto. During apartheid building walls in the townships was illegal, only chicken wire was allowed, because the police could not see into the yards and make sure everyone was obeying the curfew. So now, in building elaborate walls (and believe me there are some artistic, and inventive kinds) the inhabitants are taking back their rights, even if it means building a wall towards your neighbor.
Makes you think, huh?

Indeed. Walls can signify so much. And that is a really interesting point about walls as a right to privacy. I have heard about that in other places as well.

And I must admit that especially here, where I attract a crowd everywhere I go because of my skin color, I appreciate privacy...and sometimes it seems that I can only find that behind walls!

On a similar note, my favorite play is called "Fences" by August Wilson. The play pretty much revolves around the metaphor of fences, and all the roles that fences can play in our lives. In that play the parents are trying to build fences to keep the people they love safe inside. But of course the children don't necessarily see it that way...

I guess walls and fences can mean so many things.