The strength of women: handicapped sports

This weekend two of the SHONA women are at a handicapped sports competition in Rwanda. In honor of the strength of women on "International Women's Day" I thought I'd share some pictures of them from the last competition they attended. 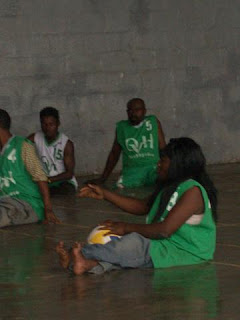 The game of "sitball" is played like volleyball, except "sitting down". Except that sitting down implies a lack of motion. In fact the players move quickly along the ground, without standing up, by pulling their bodies with their hands. Since the players are handicapped and are generally unable to stand anyway, they are quite adept at moving quickly along the ground using their arms. They also have extremely strong arms, from years of carrying the weight of their body in their arms. 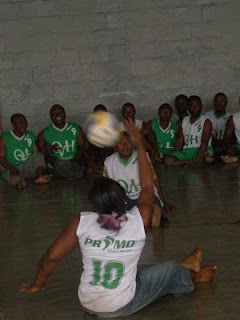 Above, Argentine, one of our craftswomen, is getting ready to serve the ball. Because of the Polio she suffered from as a child Argentine's legs never developed. She is unable to use her legs at all without wearing heavy metal leg braces. For the game, she has taken off the leg braces.

To the left is Mapendo, another craftswoman. She is 19 years oldand the star of the women's team. They position her next to the net, and she spikes the ball down on the other team almost every time. Mapendo has the use of one of her legs. And some extemely strong arms! 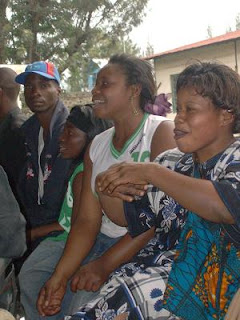 Cheering from the sides. 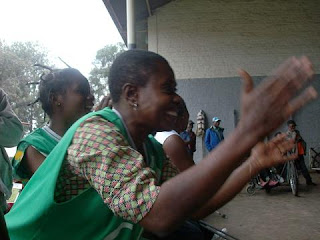